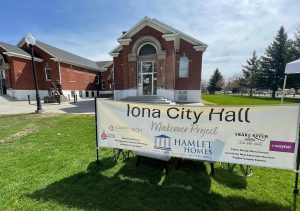 With the planned expansion of Hamlet Homes into Idaho, management teams spent a lot of time coordinating with the local planning commissions. During these visits they saw a big need. Iona’s City Hall hadn’t been improved in decades. The front steps were crumbling. The entryway looked worn and tired. Years of city budget cuts had taken their toll.

Fortunately, Hamlet knows a think or two about creating a showcase facility.

The project quickly bloomed into a fun give-back activity for many members of the Hamlet team—most of whom travelled up from Utah to participate.

Iona is a small agricultural town in Eastern Idaho 45 miles northeast of Pocatello. Originally homestead in 1883, the city of Iona is known as a “Small town with a big heart.” This new chapter in Iona’s history begins with a makeover.

Early in the morning of May 5th a large tourbus arrived with more than 25 Hamlet Homes employees excited to share their gifts and talents. The day before the front stairs were knocked down and removed. Now with the arrival of the eager crew, the pouring of the new stairs began.

But they didn’t stop there. Inside the walls were given a fresh coat of paint, tile was replaced, and handrails updated. The remodel immediately began brightening up the entryway.

“No one has ever volunteered to help with infrastructure.” Said Iona Mayor, Dan Gubler. “We are grateful.”

The funny thing is, Hamlet Homes hasn’t yet broken ground on their first home in Idaho. Tami Ostmark, VP of Marketing & Owner said, “Hamlet believes that we are bigger than the homes we build. We don’t just want to build in a community, we want to build up a community. When we learned there was a need at City Hall, we wanted to help. There’s no better place to start than Iona City Hall.”

Jon Southern, COO & Owner of Hamlet added, “We are very excited about developing new beautiful homes in Iona. In 10 years, it would be great if we all recall ‘that day in May’ when Hamlet came to town to remodel City Hall and how we are still a major part of the community. We are excited to grow with the people of Iona and the many communities in Idaho.”

Iona is just one of many Idaho cities that will be getting new Hamlet Homes.

Since the company’s founding in 1995, Hamlet has built more than 4,000 single-family homes in 65 communities. They’ve been recognized with many local and national awards for their Sustainable Business & Design as well as for being Quality Builders.

The Salt Lake Chamber honored them as the Veteran Owned Small Business of the Year. In 2021 they received Best of State in Real Estate Development for the seventh time and in 2019 they were listed as Best of the West in both Real Estate Services and Architecture.

But that’s not all, Professional Builder Magazine listed them again on the Housing Giants list, and most recently was named by Utah Business as a Best Place To Work.

Obviously, Hamlet doesn’t care as much about the awards as they care about the impact in the community.

This is a sample alert message.
Cancel OK
×