In 1995, Brodsky founded Hamlet Homes. Much of the success of the company was attributed to the leadership of John Aldous, whose industry knowledge and personal integrity as President guided the growth of the company for more than 20 years. “Hamlet Homes has worked diligently in its 23 years to create attractive residential neighborhoods in Utah, from Springville in the south to Tooele in the west, Park City, Summit County, and Wasatch County in the east, and as far north as Weber County,” said Brodsky.

“During that time, Hamlet Homes designed and built more than 3,500 homes to meet the needs and wants of our customers,” continued Brodsky. “We grew from our first annual revenues of $238,000 in 1994 to nearly $108 million in our peak year in 2006, and were proud to withstand the severe housing recession from 2008 – 2012. Unlike many in our industry, we did not shut our doors, but instead, fulfilled all of our obligations to our customers, contractors and vendors who, in turn, remained loyal to Hamlet as we began a recovery in 2013.”

With the sale of Hamlet Homes to its senior managers in 2017, Brodsky continues to serve as the CEO for Hamlet Homes and, over the next few years, will provide support and advice to the new owners.

Gittleman explains, “In 2016, Elliott, Phil, Jon, and I were thrilled when the opportunity to purchase Hamlet Homes became available. We are building on the success and sterling reputation that Michael Brodsky established for the company he founded 23 years ago. We have a clear vision and ambitious plans for Hamlet Homes moving forward, that will include continuing to build great homes and providing great experiences for our customers.” 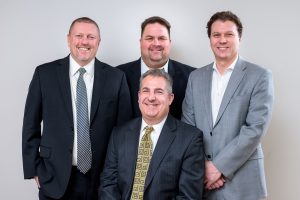 Brodsky, in addition to his role as CEO for Hamlet Homes, continues as the President and sole owner of Hamlet Development Corporation. Hamlet Development, along with the very talented support of Nick Mingo of EDM partners, Hayley Pratt, Land Development Specialist and Holly Franklin, Executive Assistant, will continue to provide Hamlet Homes with high–quality neighborhoods across Northern Utah. Hamlet Development also oversees the management of rental properties, including a new Class A 34,000 sq. ft. office building designed by Architect James Glascock, that is currently under construction in Granton Square, a mixed–use development in Murray. Brodsky has hired Furst Construction as the General Contractor for the office building which is slated for completion in summer of 2019. The building will serve as the corporate headquarters for Hamlet Homes who will be occupying 7,000 sq. ft. of the building. Hamlet Development and US Title Insurance Agency will also be tenants in the building. Located at 84 West 4800 South this class A building is in an area of Murray undergoing dynamic redevelopment. Leasing of the building is being handled by Orden Yost of CBRE.

AWARDS: Hamlet Homes has been the proud recipient of many national awards including the ‘Builder of Integrity Award’ from the Quality Builder Warranty Corporation in 2004, 2005, 2007 and 2010; Builder magazine’s ‘Fast Track Hall of Fame’ recognized Hamlet as one of the fastest growing builders in the country for five consecutive years from 1999 – 2003 – one of only five builders to remain on this list for five consecutive years. In 2016, Hamlet was a finalist in the National Housing Quality Awards, the highest quality recognition the National Association of Homebuilder provides its members.

Locally, Hamlet has received the 2016 ‘Best of South Salt Lake’ for Home Builders, 2015 ‘Green Business Award for Sustainable Business & Design’ from Utah Business magazine; Hamlet was awarded Utah’s ‘Best of State’ medal for residential construction in 2003, 2004, 2006 and 2007, and was the recipient of the 2009 Governor’s Quality Growth Award. In 2002, Michael Brodsky was an Ernst &Young finalist in the Entrepreneur of the Year Award.

This is a sample alert message.
Cancel OK
×